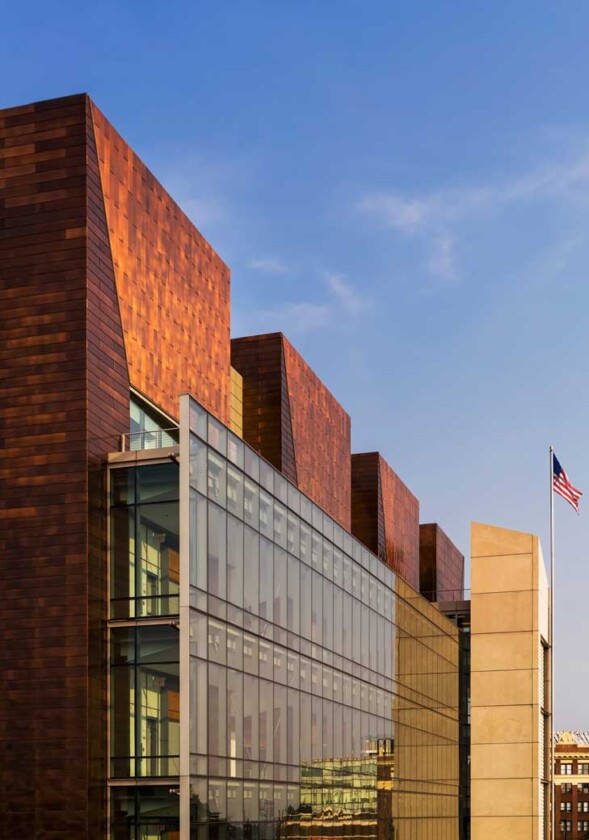 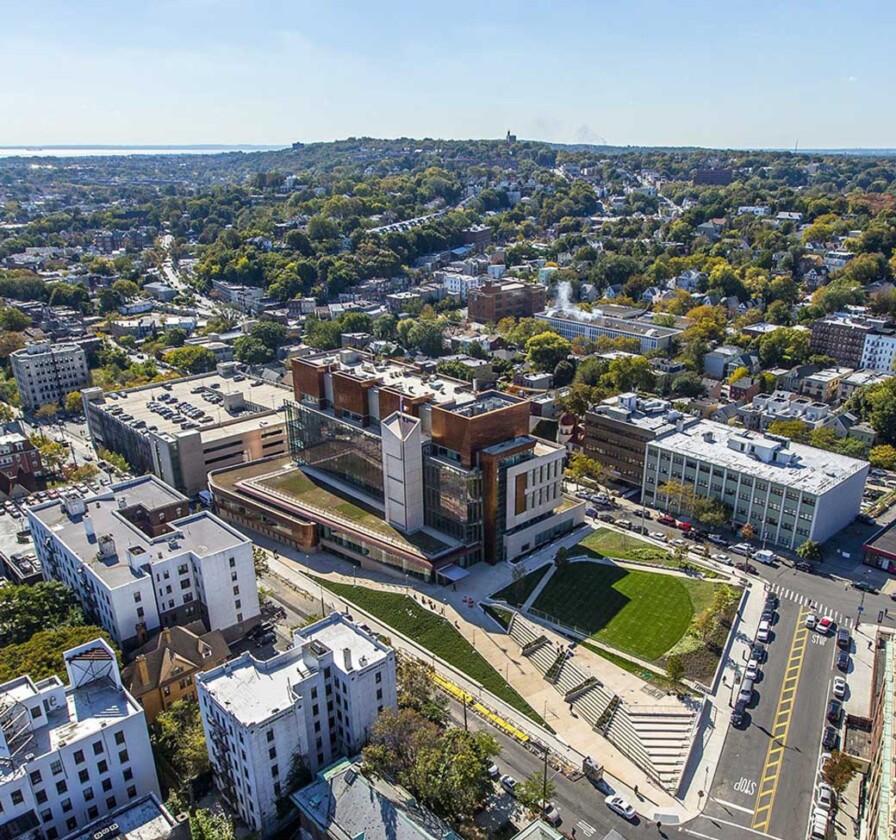 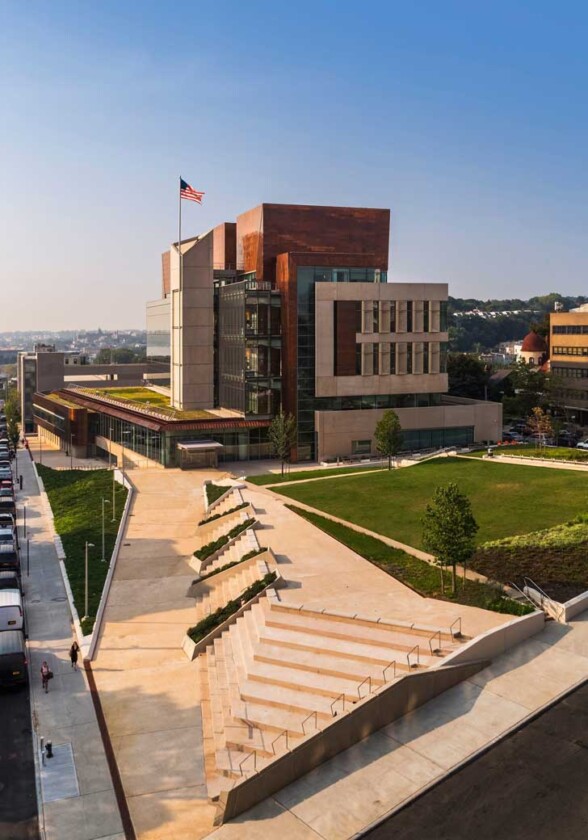 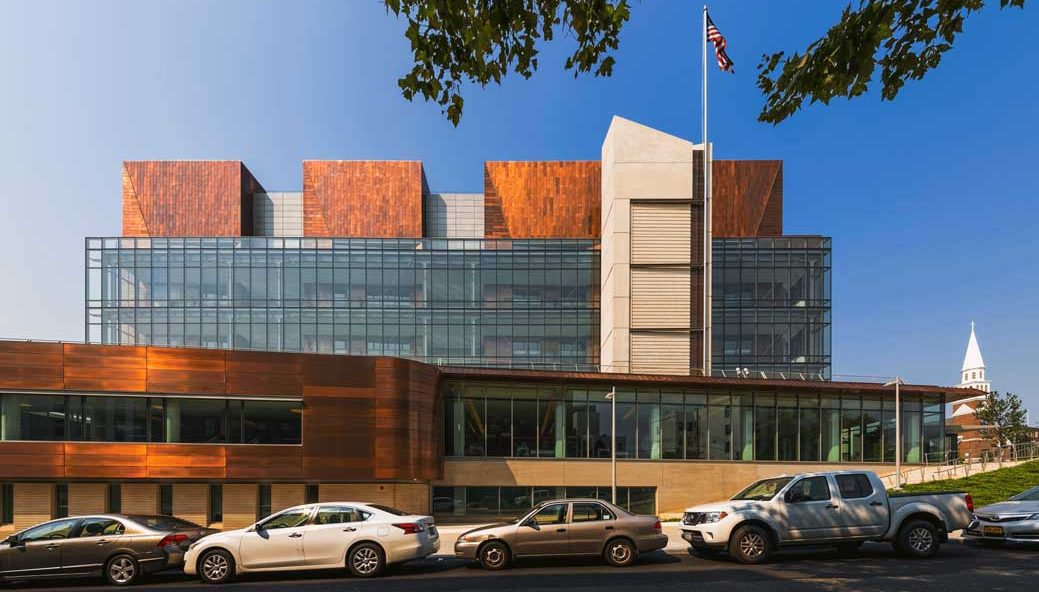 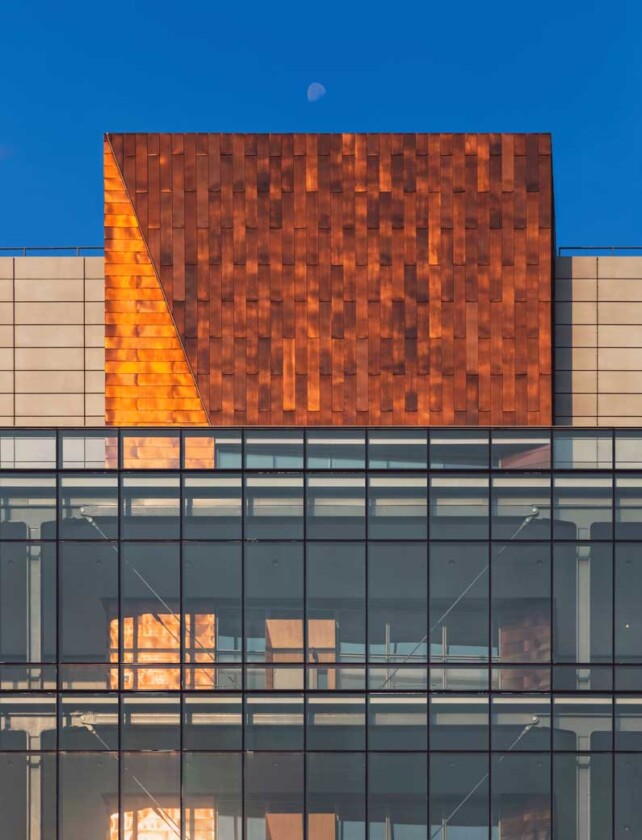 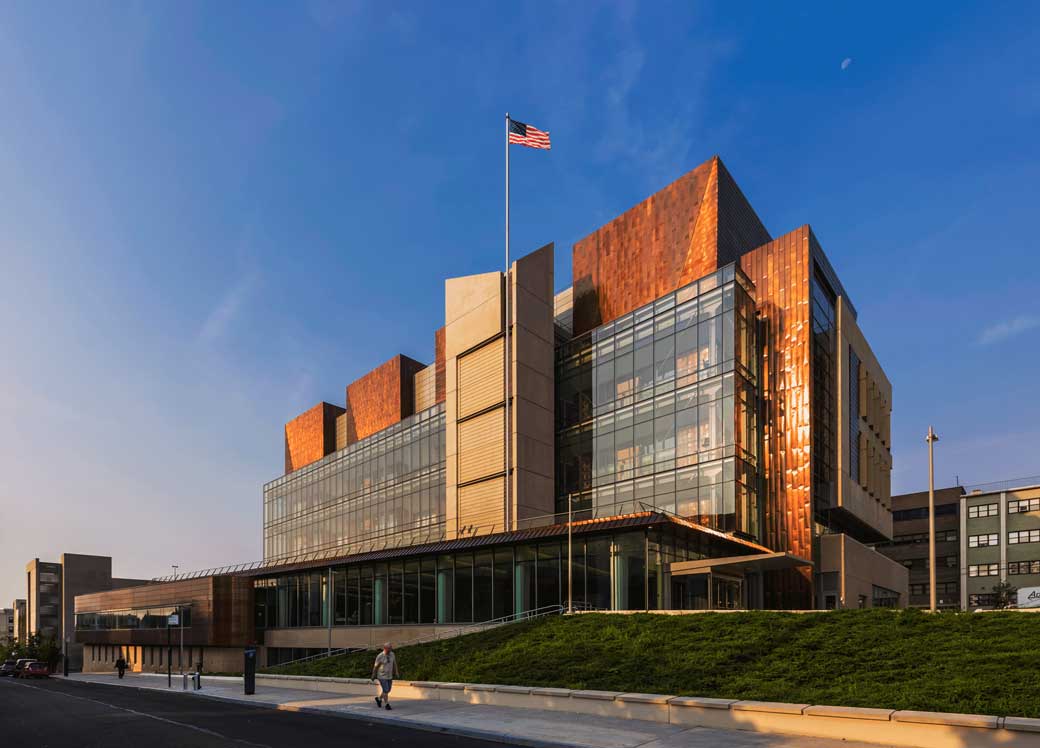 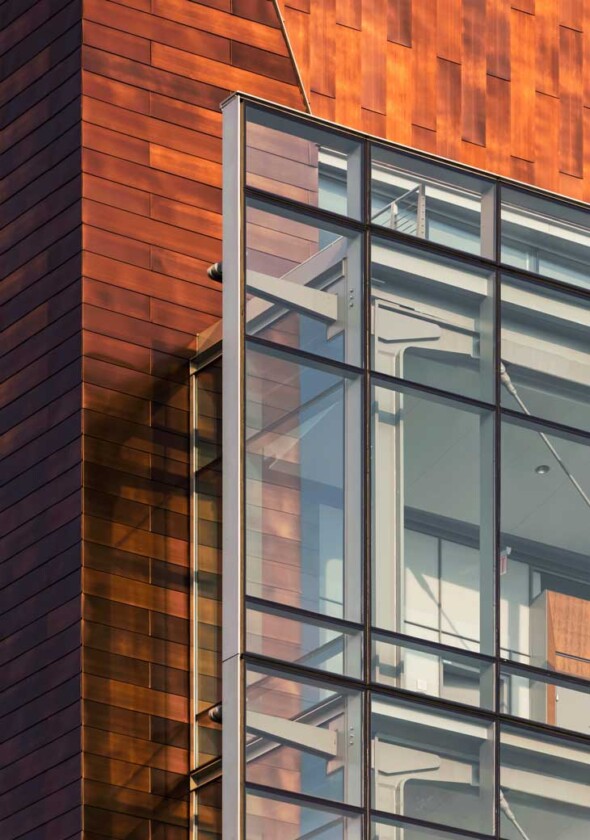 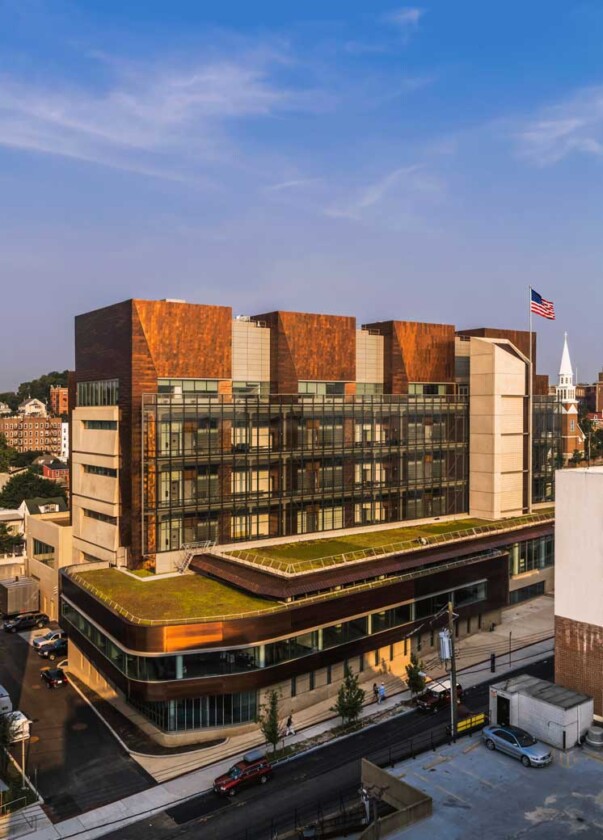 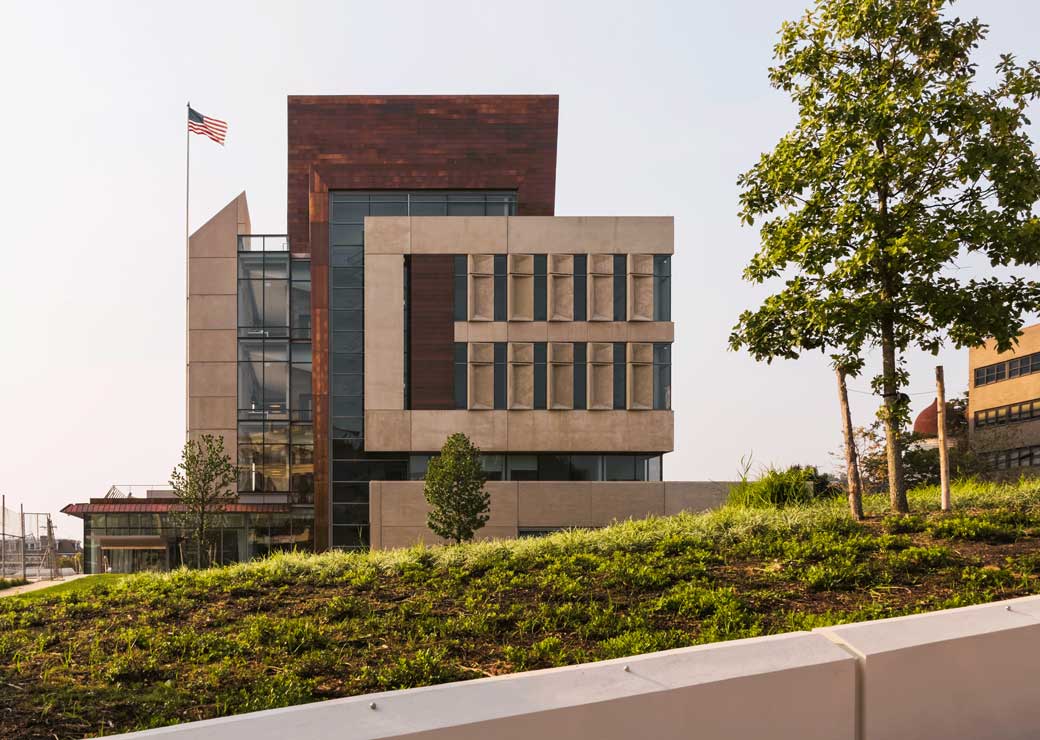 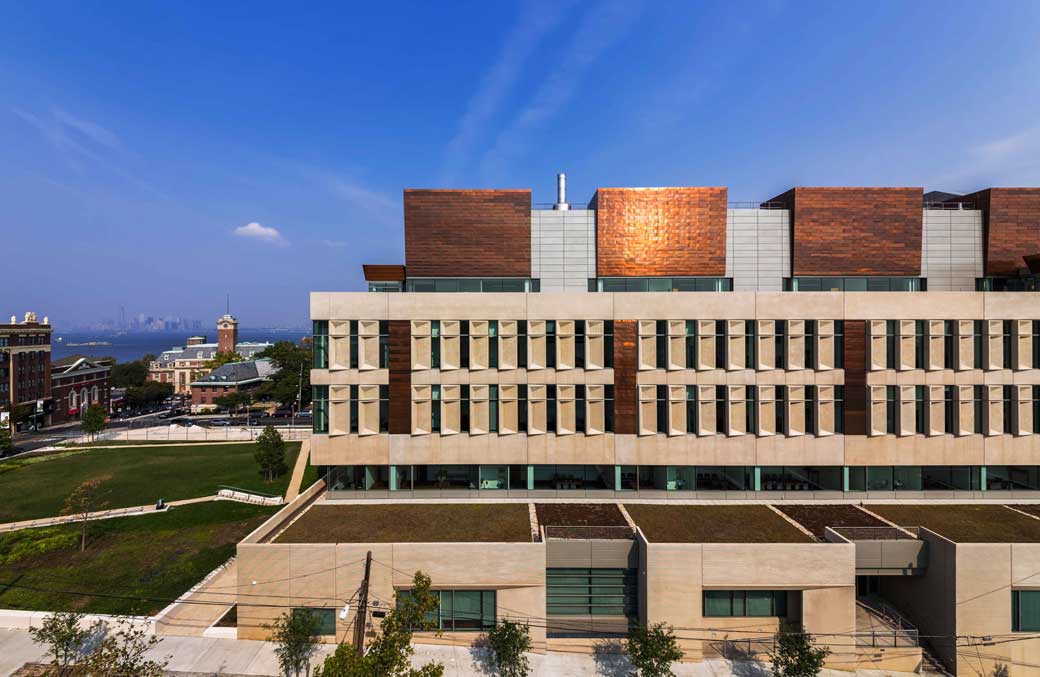 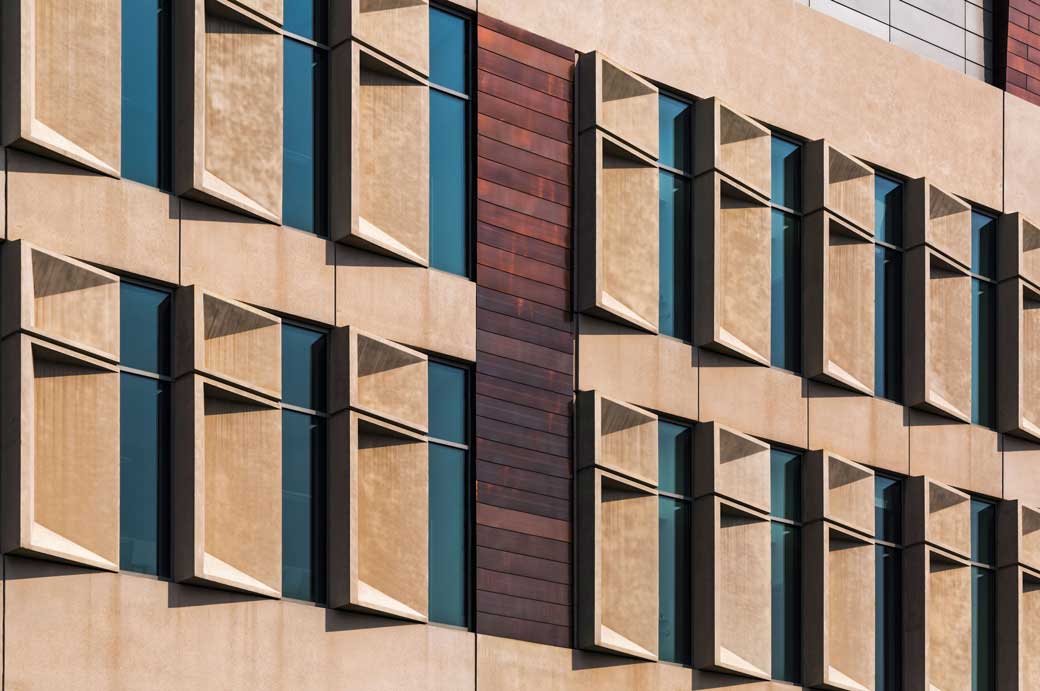 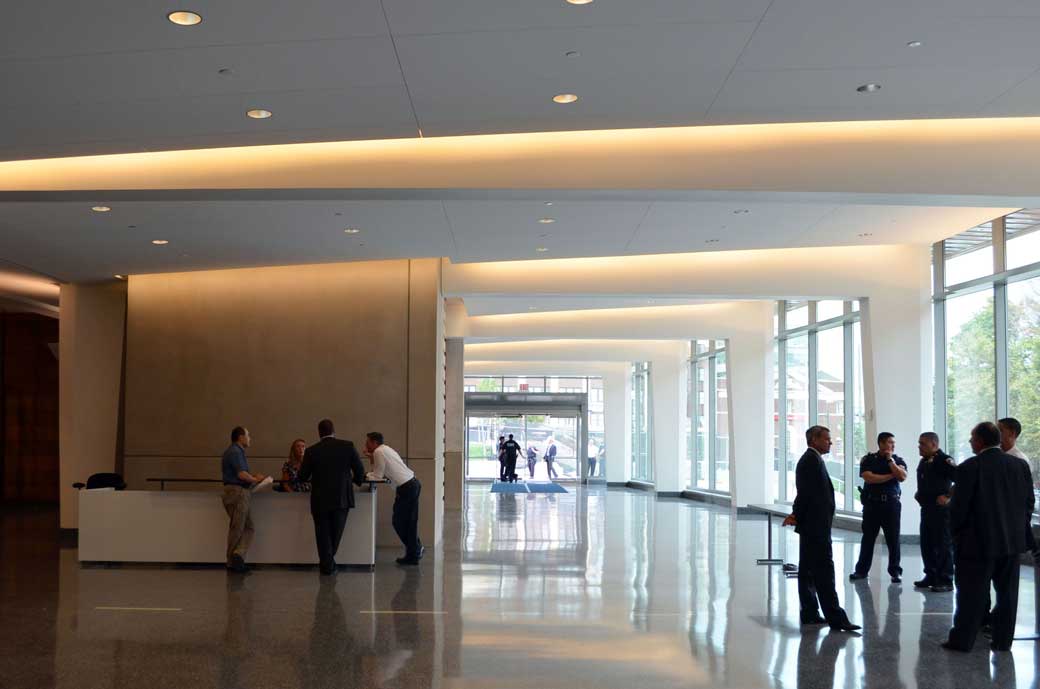 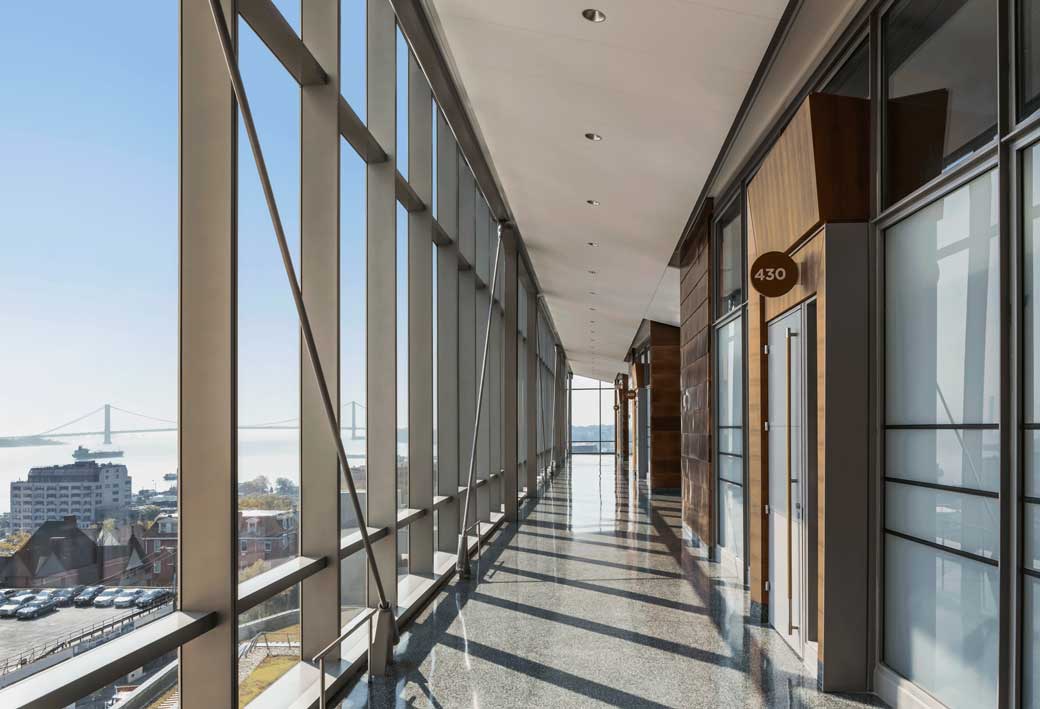 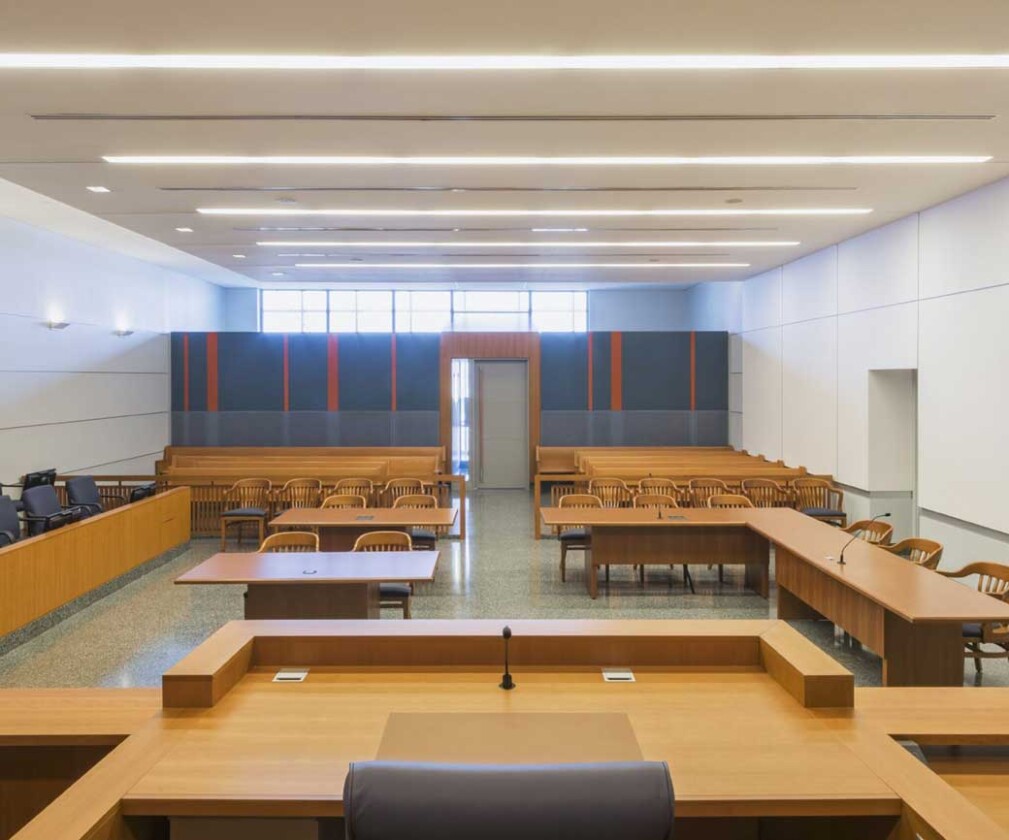 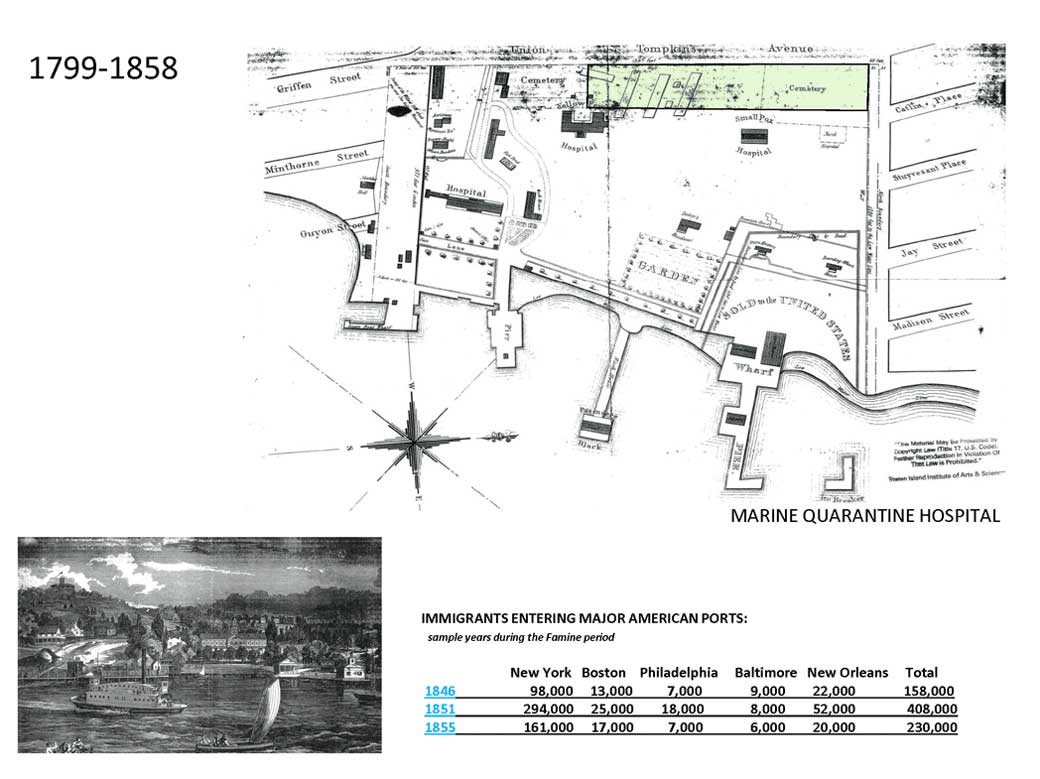 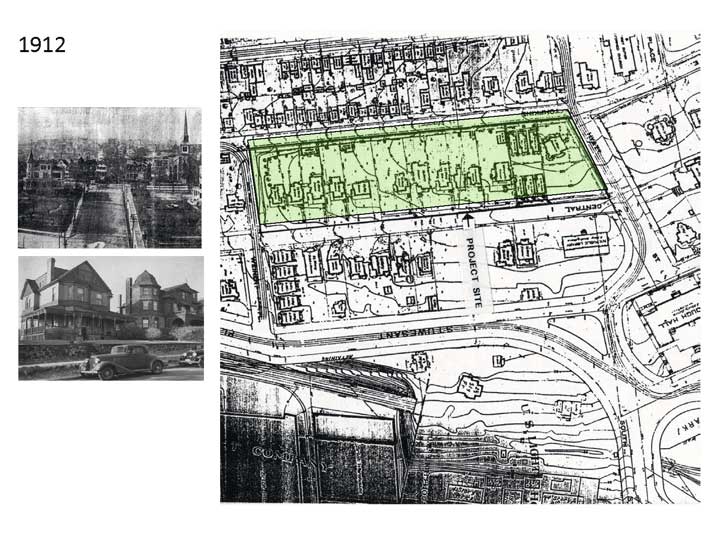 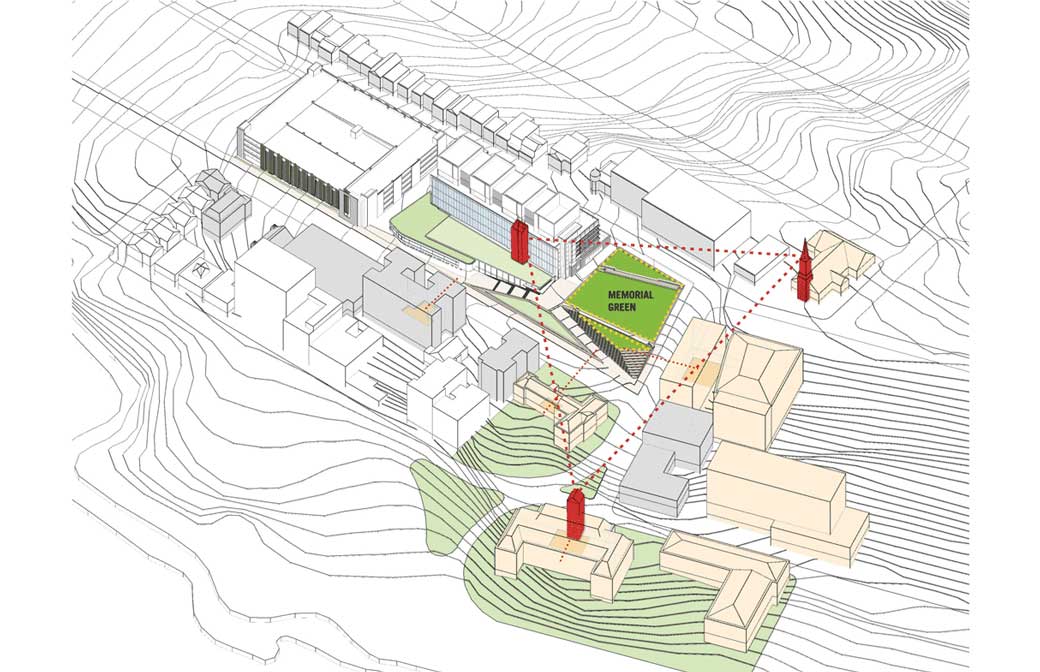 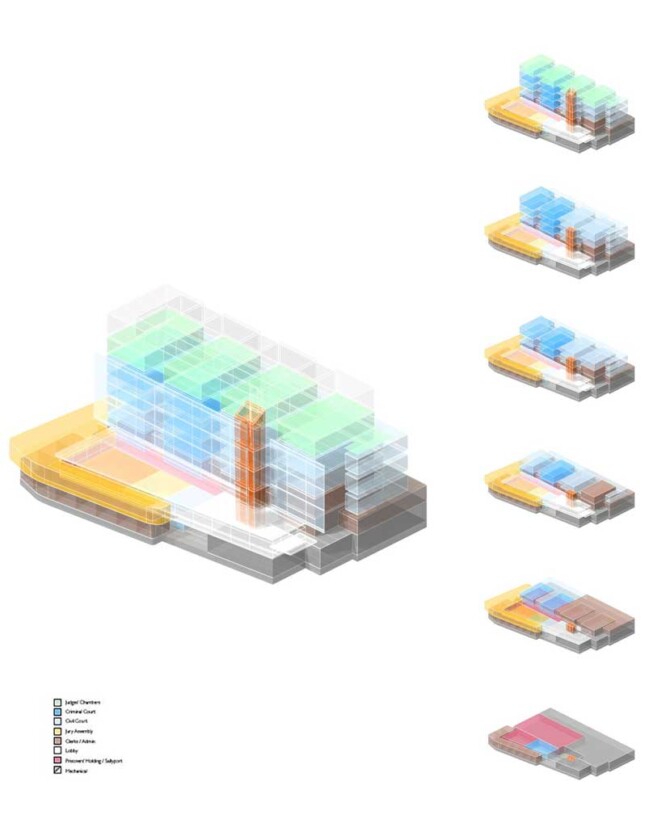 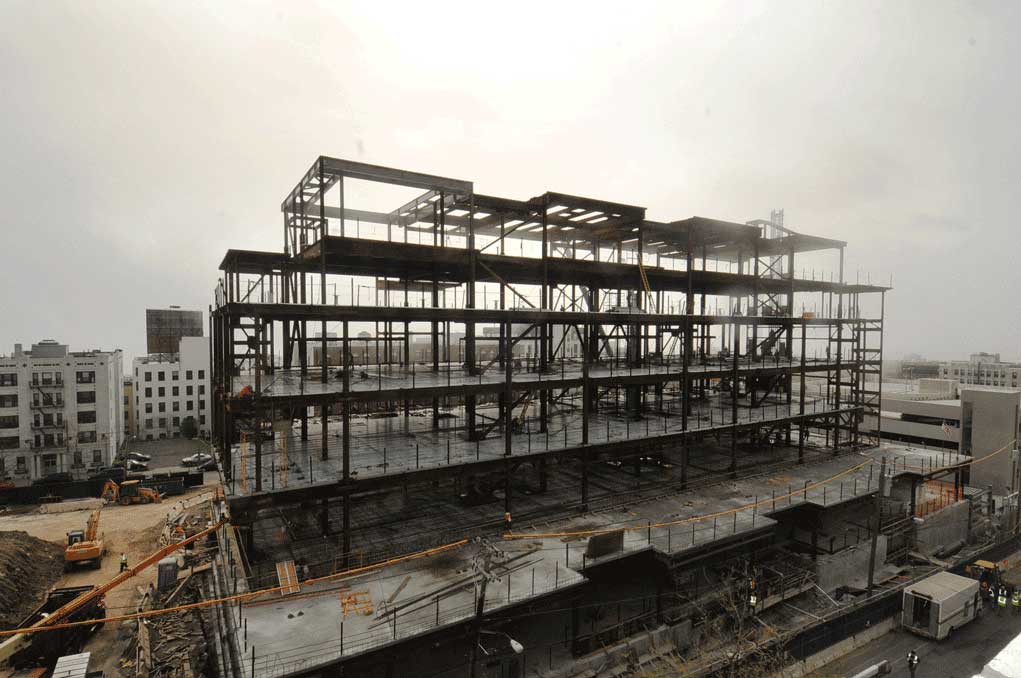 On a hilltop site overlooking New York Harbor, the Staten Island Courthouse projects a civic identity and a distinctly twenty-first-century vision of our judicial system. Four copper-clad “towers of justice” are a beacon and a commanding presence on the St. George skyline. Housing the New York State Supreme Civil and Criminal Courts, lower Criminal Court and related agencies, the facility fulfills the modern programmatic requirements of the Court while respecting the site’s historical significance and the material character and scale of the surrounding residential neighborhood. Archeological investigation into the history of the property as a 19th-century quarantine hospital uncovered a burial ground at the northern end of the site. This has been commemorated with the creation of a Memorial Green – a new civic landscape framed by the Courthouse, Borough Hall, the New York Public Library and the Staten Island Theater. The new courthouse provides two distinct faces to the City, responding to the dual contexts of harbor and community. The primary public areas of the building, including the lobby and jury assembly spaces, face east toward the harbor. The building offers striking views of the Memorial Green, New York Harbor and the Verrazano Narrows. The building’s western façade is a denser composition of precast, copper and glass in response to the afternoon light. The opacity provides privacy for jury deliberation rooms and judges’ robing rooms, adjoining the courtrooms within. The ordering of the four towers responds to the rigorous organization of the courts within. The towers are set back from the transparent glass curtain wall, providing a connecting corridor for public circulation, allowing natural light into the building’s public spaces and offering views of the harbor beyond.